On Earth, 500-600 Volcanoes exist. A volcano is a relief of the terrestrial crust (submarine or air) formed by the ejection and stacking material from the rise of magma in the form of lava ash.

Volcanic activity can take several forms; each of them depends on the quantity of gases present in the magma and on the percentage of silica. The magma composition is therefore the key. The gases for example facilitate the explosive activity, whereas the silica makes the magma very viscous and therefore less mobile.

The magma derives from partial melting of the mantle. It is through chimneys or ducts that molten rock reaches the surface and the accumulation of these rocks can reach thousands of feet thick forming the mountains and even islands.

A second major site of active volcanism is along the axis of the oceanic ridge system. Here it is present another kind of volcanism, which is the one generated by the hot spots. This corresponds to deep climb of magma, which pierces the lithosphere. The hot spot can be either on top of ocean ridges or next to them and usually are responsible for the generation of a series of islands.

Here we will have a collage of images taken with Sentinel-2. In some of these images, it is worthwhile to note the presence of the caldera. A caldera is a circular depression or nearly at the top as large as the volcano. Calderas form as a result of a cataclysmic explosion of the volcano, where a giant magma chamber is emptied in a few hours forming a large depression, whose width depends on the size of the magma chamber.  The eruptions cause rapid evacuation of the magma chamber and collapse of the summit overlooking the volcano.

The Aeolian Islands are a volcanic group off the northeast coast of Sicily. The group therefore forms an island back arc with the two southernmost, Vulcano and Lipari, followed by Salina, Filicudi, and Alicudi.  The isolated island on the right corner of the image is Panarea and further north Stromboli is located. The volcanic activity of this area is due to the subduction of the African plate under the European one. It is still active in Lipari, Vulcano and  Stromboli, whereas for the remaining islands the volcanic activity ended between 5000 and 20000 years ago.

Just few kilometers across Kagoshima Bay from the city of Kagoshima lays Sakurajima, one of Japan’s most active volcanoes. The volcano is made of a new volcanic cone inside a very wide Aira caldera forming the northern half of Kagoshima Bay. Once an inland, Sakurajima joined to the Osumi Peninsula during the major eruption of 1914. Eruptions in history: 708, 716-718, 764, 766, 778, 3 during XVI cen., 15 during XVIII cen., 2 during XIX cen., 10 from 1914 to 1950, continuous explosive activity of the southerner crater since 1955. 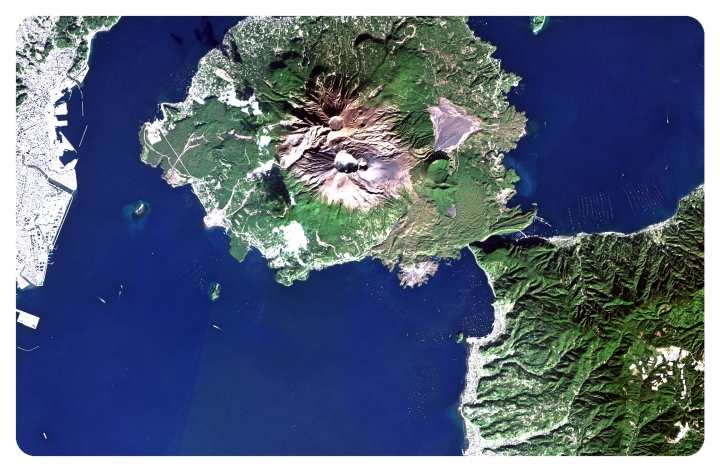 Next to Vesuvio, there is a presence of the Campi Flegrei. Campli Flegrei is a complex volcanic area characterized by a peculiar landscape including several volcanic land forms. Eruptions in history: 1198, 1538.

This site uses Akismet to reduce spam. Learn how your comment data is processed.